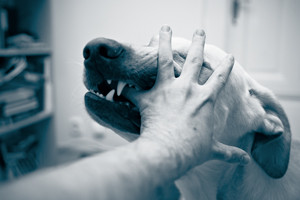 In Rhode Island, dog bite cases are really broken down into two different categories. One is when a person is bit by a dog off the owner’s property. The other is when the dog bite occurs technically which is called within the enclosure of the owner’s property. In the first case, if you’re ever bitten or attacked by a dog or any animal in a public street, on a sidewalk, off of someone’s property, that’s strict liability in Rhode Island which means it’s really gonna be a matter of how much your case is worth as opposed to proving that the owner is at fault. Even if you’re bit by a dog or attacked by an animal on an owner’s property, they can still be liable but in Rhode Island, we have one-bite rule which means basically the owner’s dog gets one free bite or one free scratching incident. So, if the dog had no prior history then there may not be a liability but again, it needs to be investigated because the dog had been deemed vicious of if there had been another dog attack which the owner doesn’t disclose, we can find that out for you.

Please fill out the form below and one of our attorneys will contact you.